You are here: Home / Lifestyles / Our Waukee Founders 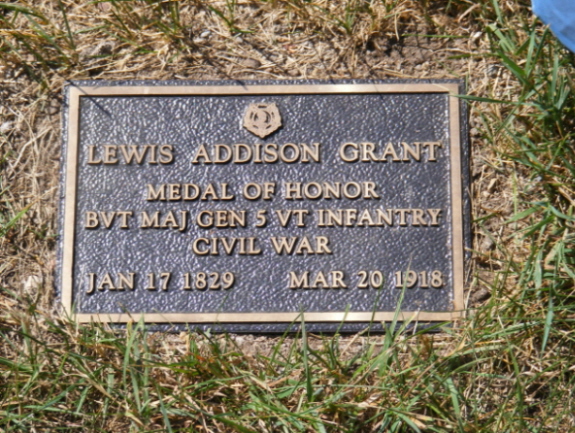 Lewis Addison Grant was born on Jan. 17, 1828, in Winhall Hallow, Vermont. He was the youngest of 10 children. His parents were James and Elizabeth Wyman Grant. He attended school until he was 16 years old in Townsend, Vermont.

He attended the Academy at Chester. He taught school for five years while he studied law. He passed the bar in 1855 and practiced law in Bellow Falls, Vermont. On March 11, 1857, he married S. Agasta Hartwell. The couple welcomed a daughter named Augusta Sarah in 1859, and unfortunately, Mrs. Grant passed away on January 27, 1859.  Lewis remarried four years later to Mary Helen Pierce, and they had two boys—Ulysses Sherman, born in 1867, and James Colfax, born in 1869. Mary Helen was a niece of President Franklin Pierce.

Grant left the firm of Stoughton & Grant to join the army at the onset of the Civil War. He was commissioned major of the Fifth Vermont Infantry Volunteers which was mustered into service on Sept. 16, 1861, at St. Albans, Vermont, to serve three years. He later accepted an additional year of service.

General Lewis A. Grant was a distinguished officer and commander of the famed Vermont Brigade. He was honorably discharged on Aug. 24, 1865. He was approached to accept another commission in July of 1866. After four years of serving, he declined the honor, preferring to live a private life.

After his discharge, he resumed practicing law in Moline, Illinois, and later, Des Moines.

William Ragan was born in Pennsylvania in 1836. He was mustered in as a first lieutenant in Iowa’s volunteer 18th Infantry I Co. on Aug. 6, 1862. He was promoted to major on May 12, 1865, with a regimental company transfer. Major William Ragan mustered out on Oct. 3, 1865 in Davenport.

In 1883, Ragan was a real estate developer/builder in Minneapolis, living with his children and a domestic helper. I found no evidence that he remarried.

Minneapolis experienced a housing boom with a steady population increase between 1880 and 1890, and Ragan began developing the land between Franklin Ave. and 24th St. The land was originally platted into two full blocks and two three-quarters size blocks. Seeing the potential for more economic return, Ragan turned the land into four half-blocks. The alley between 22nd and 23rd Avenues was transformed into a street 38 feet from the east face of blocks 1 and 2 of Ragan’s Addition. His lots were only about half the size of a normal Minneapolis city lot at the time.

Today, Ragan’s Addition, which began as housing for Scandinavian and East European immigrant workers for nearby Milwaukee Railroad shops, yards and new factories, was listed on the National Register of Historic Places in 1974. I could not find any information about Ragan’s whereabouts after his interest in the Minneapolis boom ended. I suspect that he may have gone north into Canada.

The Waukee Area Historical Society will be hosting a 150th birthday celebration for our community in June 2019.